Click on the flag below to browse our rare, unique, and space flown items:

Apollospace is pleased to offer a number of quotes on parchment paper that Rusty Schweickart carried into space with him on Apollo 9.  In my August 2019 interview with Rusty, he discussed the quotes: 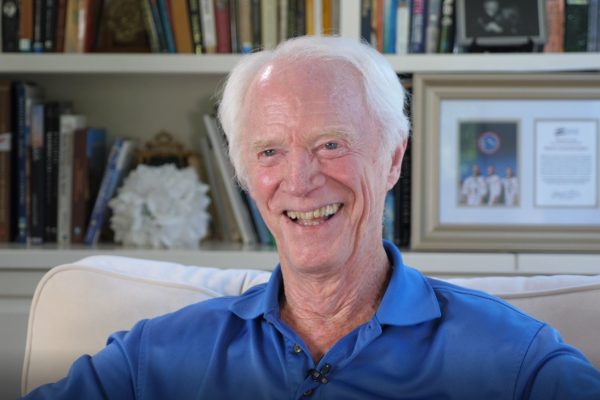 During Apollo, we had very limited space and weight available in the spacecraft. I mean, weight is always a precious thing, as is volume. But NASA had the foresight of letting all the astronauts bring up a small thing called a personal preference kit or a pilot’s preference kit, which was about a couple of pounds and something a fraction of a lunchbox kind of thing, where you could bring some things that were personal to you. They had to be packed and vacuum-sealed and couldn’t out gas and all those kinds of things. But you could bring some personal things up.And in the early flights, if there was a little extra weight that we could carry, it wasn’t exactly strict. You know, there was a couple pounds, could maybe be three pounds or maybe four pounds or whatever. So, coming up on your flight, you’re thinking, well, what I should I bring with me? You know, what do I wanna bring? You have all kinds of personal things, and, you know, some jewelry from my wife and some of this, that and the other thing, little mementos.

But in addition to that, I tend to be a person interested in philosophy and intellectual thought and that kind of thing, and I’ve read — do a lot of reading and a lot of it in philosophical times kinds of things. And so, I thought to myself, this is a very special time. I’m probably not gonna get to fly more than once or maybe only a couple times, but maybe only once. So, I wanna take up more than just me and, in fact, I am not just me, but I am the things that I’ve read and the things that I’ve experienced, and so I wanted to take up with me what I — I never have found the right words, but let me say, little samples of the wisdom of humanity, you know, over the years. And whether those are fiction authors or famous people like Jack Kennedy or Robert Kennedy or Winston Churchill or whoever or things out of the Bible, whatever it was, wherever — things that I had read that I felt really contained nuggets of human experience over the centuries of human development.

And so, for six months before the flight on Sunday evenings when I was in Houston at home, my wife went off to choral practice and left me with the kids. I’d put all the kids to bed, five of them, put the kids to bed and then I would sit in the living room with a circle of light around me, everything else dark, and I had all kinds of books and things that I’d read, and I would be flipping through them to see where I had dog-eared something or whatever. Out of that, I picked, I think it was a total of 23 paragraphs, sentences to maybe a couple paragraphs at most, of something that something that somebody had said or an author had written or a person had thought or a poem a poet had written.

And I picked, in the end, winnowed that down to 23 small things, and I had them printed in gold leaf on parchment. And then I cut them out, and I had many different copies of them made. I don’t know how many copies I made, but a bunch of them, because parchment is pretty thin, I could pack them really tight, and I wanted to have those samples of human experience and wisdom and insight with me when I went up in space and even went outside. And I frankly don’t even remember whether I had one in my — had a set in my pocket when I went out, but I certainly had them in flight with me.

And those are very special to me, because that was my way of honoring the whole evolutionary experience of intellect and consciousness and evolution here on planet Earth, and so they became a very personal, they’re not the normal kind of memento, but to me, that was my way of acknowledging that I was much more than an individual at this moment. We are all made up of everything that we’ve read and the experience of humanity before us, and, of course, we’ll pass our own contribution to that on to the next generations.

Apollospace also features a large selection of space flown flags from a number of pioneering Apollo and Gemini missions. Guaranteed authentic with most items being signed and/or including a letter of authenticity from the astronaut who carried it.

Click on the flag below to browse our rare, unique, and space flown items: